Declawing of cats is still a fairly new procedure in the overall terms of veterinary medicine, but it is perhaps the most hotly debate topic there is concerning cats.

It is still a very common practice in North America, while it is illegal and banned in most European countries, as well as several other countries.

There are benefits to declawing of cats and there are cases where it might be the only practice that saves a cats life.

Perhaps it is time that the United States and the rest of North America fully resolve this issue and discuss it for the cruelty that it actually is.

WHAT MAKES UP THE DECLAWING OF CATS ?

Before discussing the actual pros and cons of declawing cats, it might be helpful for any owner to fully understand who totally oppose it.

It is opposed and only recommended in the most extreme of circumstances by both the European Councils Convention for the Protection of Pets as well as the UK’s Royal College of Veterinary Surgeons.

However, before most Americans cry foul play and this is the United States and not Europe, it is also held in the same viewpoint by the following American groups.

The World Small Animal Veterinary Association, the American Society for the Prevention of Cruelty for Animals, and the Humane Society of the United States, just to name a few.

THE PRO SIDE OF THE ARGUMENT

As controversial as the declawing of cats is, it still has some pros that need to be discussed.

The first benefit is to protect small babies, small children, as well as any human, especially seniors that may have immune-compromised conditions.

A cat that scratches can be very dangerous to all of these groups, especially babies and someone whose life could be in danger from a harmful scratch.

The next potential benefit of declawing of cats would be to protect other cats that have been declawed from being injured by a cat that is not declawed.

Next would be what might be considered an extreme situation, where the only way to save a cat’s life is to have them declawed.

In situations like this, an owner may have to choose declawing, have the cat put to sleep, or give it up for adoption.

However, cats that have a history of scratching may have very little chance of being adopted.

All of these issues combined do not equal the main reason the majority of Americans have their cats declawed; to protect their belongings.

Survey after survey has indicated that the number one reason owners decide to declaw their cat is to protect their furniture, carpets, and drapery.

There are also several apartment communities as well as landlords that require cats be declawed as part of the rental contract.

This is a reality that exists, as many owners, at least for now, may have to undergo or find another place to live.

Some of these pros are very valid concerns but what a lot of owners do not understand, is that there are other options available before you have to subject your cat to this extreme procedure.

THE CONS ARE OVERWHELMING 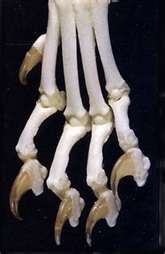 Alot more is being amputated then just the claws

The cons or the dangers of declawing of cats is so overwhelming, that if any owner truly sits down and weighs them against the pros, they would either not have the procedure done, or perhaps decide that a cat should not be their choice of pets.

What most owners do not understand is that this is a surgical amputation of the first joint of a cats toe, including the nail.

This is not just trimming their nails, but rather a procedure that is commonly performed using a guillotine-type blade.

This is worth repeating; it is a surgical amputation and is referred to as onychectomy.

However, this is where there is still confusion with most owners and this actual procedure.

Declawing of cats also consists of not only amputating the claws, but your cat’s whole phalanx all the way up to their joint.

This includes the bones, ligaments, and tendons.

To remove your cats claw, their bones, nerves, joint capsules, collateral ligaments, as well as their extensor and flexor tendons must be amputated by the guillotine-type blade.

This is not just one simple surgery.

Instead it is ten separate and extremely painful amputations up to the last joint of each of your cats toes.

To put it into a human perspective,declawing of cats would be the same as cutting off your fingers at the joint of each finger; one at a time.

For just one moment, try to understand how painful that process would be even if you were totally sedated.

There is another, newer procedure involved with the declawing of cats that utilizes a laser that is considered to be safer, and although it is not near as painful to your cat, it is still extremely painful.

However, there is yet one other procedure, but even the AVMA, American Veterinary Medical Association is strongly opposed to preforming and most veterinarians will not do it.

It is referred to as a tendonectomy and this procedure involves cutting the ligaments behind each toe which in turn will prevent the claws from being extended.

With this procedure, you will have to trim the nails of your cat on a regular basis.

It is believed to also shorten the recovery period of your cat but it is not without complications and could impede your cat ability to walk normally. Again, the AVMA does not support this procedure.

The declawing of cats is perhaps the most painful thing you could ever expose your cat to; period.

However, beyond this excruciating pain, there is a myriad of potential complications that may occur, and sadly, do occur in many cats.

The first is the potential complications are abscess that can very easily lead to bleeding, Cystitis caused by the stress that your cat is undergoing, as well as infections.

This horrible process can also lead to an altered gait that can eventually lead to the formation of arthritis or an eventual lameness in your cat.

However, this is only the beginning, as it can also lead to permanent tissue as well as nerve damage.

This procedure is so painful to some cats that they may have a long term pain issue that will also alter their behavior.

There have been several studies that have indicated that declawing of cats also face the risk of behavioral problems after the procedure.

Your cat, regardless of what many experts try to counter with, feels totally defenseless.

You have just taken away their only real method of defending themselves.

Because of this they may become severely distressed, very insecure, and the react in the only method they have left at any type of defense; biting.

They may also become so distressed that they begin to both urinate and defecate outside of their litter box.

The argument that the declawing of cats may be the only thing that keeps them in their home may totally backfire because of their sudden behavioral issues.

The reality of this fact may be that they end up in shelter after all.

Declawing of cats will always be one of, if not the most, controversial of all cat topics. Perhaps it is time that North America wakes up to the reality of just how cruel this procedure is.

If the protection of your furniture is more important than your cat, that is your option, but there are alternatives.

These alternatives include specialized trimming clippers where you can trim your cat’s claws extremely close.

There is also a solution called Soft Paws which consists of light vinyl like nail caps that are glued to your cat’s front claws.

And then there is the alternative to simple buy your cat a very large scratching post and work with them.

There will be very unique situations where a cat may have to be declawed, but you should weigh every other possible option first.

This is not about your furniture; it is about the life of your cat.

Alternative Choices to Declawing of Cats

More About General Issues in Cats:

One of the worst mistakes that you can make is to try to teach them or train them the way that is recommended by dog trainers or behaviorist.

The head is the first thing that you or other animals see in your pet and the position of the head will tell you several things.

Common diseases in older cats will always start with the threat of cancer as it is the most common killer of an older cat.

There is one thing that any expert will have a hard time disputing; the better you take care of your cat the longer they will live.

There are still several pundits that suggest that if holistic medicine really worked, it would be much more acceptable than it currently is.

Is a condition where there is an abnormally high concentration of calcium in their blood.

Will depend on the breed of your cat as what is considered hyper in some cats may just be common communication to other cats.

One your cats biggest allies is a continual and always fresh supply of water as well as several supplements.

Will all depend on your specific cats overall health as well as how their nutritional needs have been met.

Is best described as some form of an unpleasant sensation that develops in your pets pain receptors.

The most common health issue is referred to as PDK or polycystic kidney disease, which is an inherited disease.

Will not show any one sign first as all cats are as individual as each of us, so there is no real documented order of the signs to watch for.

Senior cats overall health once they reach the magical age of 13 plus will require some special attention on your part.

Are still controversial but if you are struggling with any type of anxiety in your cat, it may be worth trying them.