Anisocoria in cats may seem very odd when you first notice it; however, it is anything but odd.

This condition is one of the most; if not the most dangerous eye conditions your cat could ever develop.

If it is left untreated for any length of time, it could very easily damage your cat’s eyes to the point that they will go totally blind.

But this may be only the beginning of the bad news, as anisocoria may be the first sign that your cat has an underlying life threatening disease.

For this reason, if you do see this condition develop in your cat, consider it an extreme emergency and seek professional medical attention as soon as you possibly can.

WHAT IS ANISOCORIA IN CATS

Anisocoria in cats has very distinctive features; it is very easy to spot and it is very frightening once you spot it.

It is best described as your cat’s pupils suddenly becoming unequal in size, and when this does occur, one pupil is constricted while the other one is dilated.

It is may be very easy to confuse this eye condition with Horners syndrome.

However, with this syndrome the signs appear on the same side of the face where an injury has happened to your cat.

Miosis or small pupil sizes may also occur, as well as a sunken appearance of the eye.

These are the two most classic signs of Horners syndrome, but again, this occurs on just the affected side.

Anisocoria in cats is entirely different as the pupils will be completely opposite.

There are several potential causes of this condition, but the frightening fact is that most of them are extremely serious.

In fact, not only is your cat’s overall eye health at risk with the condition, your cats life may be at risk.

The pupils of your cat’s eyes are the circular opening in the middle of their eye, and it serves several functions.

It allows light to pass through it, as well as expanding and contracting when light is absent or fully present.

It is an absolutely critical part of your cat’s eyes, and if there is any change at all to them, it should not be ignored as just something odd.

If it is ignored, you are placing your cat’s life in jeopardy. 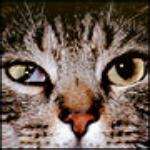 SYMPTOMS TO WATCH FOR

Anisocoria in cats does not have a lot of symptoms or warning signs, but the ones that you will see are much more than just some type of an irritation.

In the vast majority of cases, inflammation may be the first sign that you will see.

An irritation is very common in all cat’s eyes several times in their lifetime, but inflammation is not.

If you do see inflammation developing, watch the eyes very closely.

No one knows your cat better than you do, and for just a casual observer, this may be nothing startling. However, for you, it is a real warning sign.

If it is indeed anisocoria in cats, the next signs you see will not only be very troubling.

They may also be life threatening as there is something very sinister causing these symptoms.

If you do see any of these changes, quickly check your cat's vision, testing them for distance by moving something in front of them.

Next check their eyelids and look for any change in the shape of the eyelid, or a change in the position of the opening as some or all of these will occur with anisocoria in cats.

However, color changes or the clarity in their eyes may also occur, as well as a very sudden development of pain in the eyes.

All of these symptoms may occur, or just a few of them, however, if it is anisocoria, the final symptom will always occur; the pupils are different sizes.

There are several potential causes of Anisocoria in cats, and they are generally classified into two categories; nervous system or ocular causes.

The potential causes of Anisocoria in cat’s falls into two categories; nervous system or ocular.

Nervous system causes usually start with some type of a head injury or trauma that has affected your cat.

Horners syndrome in cats will also show severe eye symptoms, but this will affect only the side of your cat’s head that has be injured.

In this case, it affects both eyes.

Your cat may also be developing some type of a disorder in their optic nerves, which is the major nerve to their eye.

However, it may also be something that is occurring in their oculomotor nerve.

The oculomotor nerve in your cat is any of the third pair of cranial nerves that originates in their mid-brain and controls most of the muscles that move their eyes.

However, it may also be the result of disorders that are occurring in their optic tract, which are nerve fibers that are associated with your cat’s eyes.

It can also be the result of a disease in their cerebellum.

The cerebellum is a portion of your cat’s brain that integrates sensory input from their inner ear and from proprioceptors in muscles with nerves impulses.

This is the reaction that helps coordinate muscle responses and helps to maintain your cats balance and coordination.

Anterior uveitis is an inflammation that affects the front or anterior part of your cat’s eyes called the uvea, which is the tissue that contains the blood vessels in their eyes.

Glaucoma is especially dangerous to your cat’s eyes as it places increased pressure on their eyes.

It can dramatically reduce the drainage of fluids in the eyes, which can very easily lead to nerve damage and eventual loss of vision.

Iris muscle abnormalities may also be a potential ocular cause, as well as eye cancer.

This is an extremely dangerous situation for your cat, as the cancer can rapidly spread to several other organs.

There are several viable treatments for Anisocoria in cats; however, all of these treatments will have to be focused on the actual underlying condition.

This is a very serious situation in your cat and once you do spot the symptoms and your cats pupils become opposite in size, it is a medical emergency.

Although it may appear odd, it is much more than just odd.

Help With Anisocoria in Cats

Have some very distinctive symptoms that you can watch for and the first and most obvious is a physical change in the eyes.

Is an inflammation of the conjunctiva, which is the tissue that lines the eyelids of the eyeball near the cornea.

Begins as a corneal ulcer in the cornea and will first appear as a very dark pigmentation.

Is so important that if not treated seriously, your cat can suffer serious periodontal disease before anything is done about it.

The symptoms will be an almost continual scratching or rubbing of the ear, redness and or swelling of the ear canal, as well as head shaking.

Is an abnormal amount of tear production generally caused by two different factors; drainage obstruction or the over production of tears.

Will show some very distinctive symptoms that something is not right and may be the start of some very serious health problems.

There are several different types but the most common is Squamous cell carcinoma, also referred to as SCC.

Can become so serious it literally looks like your cat’s eye is about to burst entirely out of its socket.

Is a condition where there is a presence of blood that has formed in the front chamber of your pet’s eye called the anterior chamber.

Are much easier to understand with some knowledge of the anatomy of your pet’s eyes, and it starts with the anterior chamber.

Is a situation where bleeding has developed in the area of your pets retina which is the part of the eye that receives light rays.

Will not be hard to spot even if it is absolutely the furthest thing from your mind.