Are there any tranquilizers for cats that will actually work, or are medications the only answer.

The answer to this is a resounding yes as there are several very good natural calming agents for cats, but all of them are not without some controversy.

However, before you make a decision of which of the natural treatments may work the best for you, it is very helpful to understand exactly what the signs as well as the causes of anxiety in cats are.

SIGNS OF ANXIETY IN CATS

The first step in selecting which of the tranquilizers for cats may work the best for your situation, it is helpful to understand the warning signs of anxiety.

If you are reading this article you do not have to be convinced that cats can suffer from anxiety attacks, as you are witnessing them firsthand.

The only real way that you can begin to select any form of tranquilizer, is to be fully tuned into the warning signs.

They will begin to surface with the anxiety.

The reason for this is very important.

If you do not know what to look for and intervene as soon as you can, it will not only affect your cat’s overall health, it may begin to affect yours as well.

However, with that being said, it is also very important to note that there is no single set of signs that you can watch for as all cats will show slightly different symptoms.

As a cat lover, the uniqueness of their personalities is why you love them, but in this case, it can make identifying the actual signs a bit more difficult.

By far and away the common signs of anxiety in cats are very sudden and excessive bouts of hyper-vocalizing.

In fact, they can become so severe that you will think that there is something terribly wrong with your cat and to them there is; they feel very anxious. 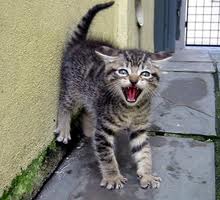 Changes in their appetite as well as their weight are the next set of common symptoms and they are generally the result of changes in the way they eliminate.

In the vast majority of cases this will be a very sudden pattern of urinating outside of their litter box that will be followed by some type of compulsive behavior, including excessive grooming.

Sudden bouts of aggression as well as overall health changes are also real warning signs, as is depression.

Depression in dogs is very hard to identify, but in cats it will be very noticeable as your cat will suddenly start to become lethargic.

However, other than hyper-vocalizing, the most telling of all the signs will be bouts of restlessness that will very quickly lead to destructive behaviors.

This will include scratching anything in site including your best furniture.

If the anxiety is severe enough, you may also begin to notice your cat trembling, which should always be treated very seriously.

CAUSES OF ANXIETY IN CATS

The next step in determining which of the natural tranquilizers for cats may be the best for your situation is to determine, if you can, the actual cause.

Although this may be easier said than done, it is not impossible.

Long periods of separation from you and your family is generally the leading cause, as well as boredom form the lack of any type of regular exercise or play time.

Fear of loud noises including thunder and fireworks are also potential causes, as well as any type of change in their normal routine.

Cats by nature are extremely regimented, and if you suddenly change something in their routine, this can very easily trigger the anxiety.

Another potential cause may be substandard living conditions such as being cramped in small spaces for too long or in large catteries.

The loss of someone in your family is yet another potential cause, as well as a longtime companion including a dog.

However, there is one other potential cause that is often overlooked and ignored; some type of health problem

If your cat has some type of developing disease or condition and you are not aware of it, the anxiety that they are showing is actually a real warning sign that they may be in a lot of pain.

Cats by their nature are also very good at hiding pain, so do not overlook this as a potential cause.

In determining which one of the following tranquilizers for cats may be the best option for you, it is also helpful to understand some of the pitfalls of them even if they are natural.

Any form of tranquilizer has the potential of becoming addictive, although this can easily be controlled.

The most popular as well as the most common of the tranquilizers for cats is Bach Flower Essences.

This was first introduced in the mid 1930’s by Dr. Edward Bach and is actually a combination of extracts from a variety of plants.

The most commonly used of this grouping is referred to as the “rescue remedy” and is made of five different flowers.

They include Impatiens, Clematis, Rock rose, Star of Bethlehem, as well as Cherry plum, and there is a lot of owner consensus that this combination can be extremely effective.

However, it must be noted that that the medical community is still not fully sold on this formulation, as there have been clinical studies that demonstrated that placebos were just as effective.

But it is also important to understand that the medical community is just finally beginning to recognize most types of herbal treatments.

However, there is one thing that is indisputable about the “rescue remedy” as the most popular of the tranquilizers for cats.

Cat owners swear by them buy an overwhelming 7 out of 10 consensus of success.

Next on the list of the tranquilizers for cats is an herb called “Valerian” that is perhaps best known for what it does for humans as well as dogs.

Although it is considered to be extremely effective at reducing muscle pain through the process of relaxing the muscles in humans and dogs, it does not do this for cats.

Instead, for reasons still not fully understood, it causes what some would consider a complete state of euphoria, making it very effective as a tranquilizer.

If your cat has any type of a liver condition, it may not be safe to use. St Johns Wort is another possible tranquilizer, but there is little research to back this claim.

There is one other form of tranquilizers for cats that you may also want to consider called Pheromones sprays, and the most common of these is Feliway.

Feliway is believed to have a very strong calming effect on cats and is considered to be extremely effective at helping them to adapting to new surroundings.

They will also help in adjusting to the loss of a family member or a longtime companion.

Tranquilizers for cats is still somewhat of a controversial subject.

However if you are struggling with any type of anxiety in your cat, they may be worth a try as there are millions of cat owners that swear by them, and they can’t all be wrong.

Sources of Tranquilizers for Cats