Whipworm transmission from dogs can affect humans and is one of the varieties of roundworms, is often confused with roundworms, and can have similar severe health effects.

In dogs, as well as humans, if allowed to go untreated, the health effects could be quite severe.

In fact, these vicious little parasites will actually live off of the tissues of the host victims, which are generally dogs, but it can also be humans.

Whip worms do affect cats, but this is quite rare.

So what exactly are whip worms, what damages can they do, and how can you protect your dog, your child, or yourself from these parasites.

Whipworms are a type of worm, and, as the name implies, resemble a whip in appearance, even though they are rarely seen.

They have long slender bodies and a section of one of their ends will actually resemble the handle of a whip.

Whip worms are most always found in warm weather climates, although they can also infect several areas in the country in the summer months when it is very hot and humid.

Very dry condition does slow them down, but they can lay in wait in the moist soil below the dry heat for years.

The more whipworms the bigger the threat

A few whip worms will not affect or pose any real problems for their host, generally dogs.

However if they hatch and spread quickly, the health implications could be quite severe from whip worm transmission.

Infection of these parasites in dogs could lead to a tremendous inflammation in their large intestines, which could cause very serious digestive issues.

The infection from whip worm transmission will begin in the host by the ingestion of the eggs.

Whipworm eggs are extremely resistant and much like roundworm eggs can live in moist soil for years.

There is no effective way to kill whip-worm eggs, as they are immune to freezing, pesticides, or worm treatments, just like with roundworms.

The only effective way to rid them from contaminated soil is to completely replace the soil, sand, gravel, or even pavement they are have infested, they are that wicked.

Once they have been introduced to the host, the eggs will very quickly settle in the small intestine until they hatch.

But once they hatch, they bore their way directly and furiously into the large intestine.

One end, however, remains in the small intestine, where they continue to mate with other worms.

Thus the cycle of hatching, burrowing, and mating really starts to grow in whipworm transmission.

The eggs that have been laid inside of the large intestine will than pass in the stool of your pet.

Once these eggs hit the outside world, they will require about 3 to 4 weeks to form, and then they are ready to attack the next host, or if your infested dog or child, the same host.

It is very important to remember that what is causing this infection is the soil; it is not the fresh feces of your pet.

IT IS VERY EASY TO CATCH

Your pet can simply catch whipworm infection by laying and rolling in infected soil or your child from playing in the same infected soil.

Whipworm transmission in dogs usually will start with diarrhea that is very bloody and has no real structure and is considered gooey.

This is not serious to your pet. However, if they are continually being infected, the diarrhea will become chronic. At this point it is serious as a second serious of infections sets in.

These infections are still not fully understood, but they will very closely resemble and are often mistaken for Addison disease in dogs.

When this happens, your pet becomes dehydrated but not in the normal form of dehydration.

What is happening is that your pets system is lacking the ability, because whipworm transmission, to conserve salt in their body.

The exact same symptoms may be affecting your child.

Over a period of time, the blood that is being lost from the stool in the form of diarrhea will lead to a weakness in the host and thus cause anemia.

This condition when combined with the dehydration, could cause the hosts organs to start to shut down and rectal prolapse may occur.

Rectal prolapse is a condition where parts of, or in severe cases, the entire rectum actually slides out of place, which can be a very serious condition for the infected host. 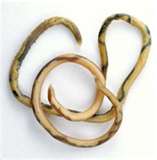 Fortunally they are very easy to treat

As serious as this infection can become, it is really quite easy to prevent and to treat.

Children that have played in any infested areas, usually sand boxes or exposed area of dirt like soccer fields or baseball fields should avoid placing their hands in their mouth before washing them.

Hand to face interactions will spread the eggs.

Any type of vegetable or fruit that has been harvested fresh from infested areas simply needs to be washed thoroughly before eating.

Watch for the symptoms of this infection in both your dog and your child; if they do show the symptoms, simply examine their stool.

Whipworms are hard to see but you can see them in most cases.

They will appear as very small white threads, and if you expect infection, treat them as soon as possible.

In humans, Mabendazole is the most frequent drug used treatment in riding the body of infection.

Albendozole is a drug that can free the body of these wicked little parasites all together.

With dogs, there are several forms of treatments available, but it is best to let your veterinarian help you with the selection.

It will depend on the size and age of your pet for the quickest and best results.

Once free of the infection, a regular worm prevention program will be required to keep your dog free on this parasite.