Are microchips in pets safe? Are veterinarians required by law to report adverse reactions to vaccines, chipping, or any other veterinary products?

There are several experts on the side of the safety of microchips that will gladly throw out the thousands of cats and dogs that have had them implanted and have never had any side effects.

However, is this entirely true, are the benefits really worth any potential risks to your pet?

These are questions that only an owner can answer, but there are some facts to consider before you implant your pet.

of all the moral challenges that this technology presents to thousands of people worldwide, it is still going to come down to the decision of the owner; at least for now.

All owners should understand that there are risks involved with any type of medical function that is done to your cat or dog, and this is no exception.

help any owner make the final decision, it should be based on the facts, not the emotions.

It should also be held in this argument the real question; what is the actual purpose of microchips?

In the vast majority of cases, owners will make the decision to have their pet implanted for one sole purpose; identification if their pet is lost.

Than you will have to ask is it always reliable.

THE FACTS ABOUT MICROCHIPS IN PETS

The first fact involving microchips in pets is the overall safety record involving the process as well as the end result.

Microchips are a relatively new process in veterinary medicine, and as such, any negative results or damages that they cause are grouped together with vaccines and other veterinary products.

Because of this, are the true results being reported to the public not only in the United States but worldwide.

The American Veterinary Medical Association, in their April 1, 2008 issue, Vol. 232, No. 7 has some rather horrifying facts about the process. 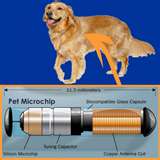 Microchips in pets are simply not worth the risks

What is important to understand is the process of reporting dangers and is widely held in the veterinary medical community worldwide is the fact that extreme under-reporting takes place.

In this report, it listed nearly 10,000 adverse reports that covered all animals vaccinated, and 65% of those affected were cats or dogs.

It also states in the report that only about one percent of all serious events are actually reported to the FDA.

It goes on to state that using this lack of reporting process, it is estimated that the actual number of actual adverse effects just to this one vaccination is more likely to be 650,000 or higher.

However, microchips in pets are different; correct? After all, the number of reported adverse reactions is actually very low and they as such they are much different; or are they?

Perhaps the most documented case involving microchips in pets and the adverse effects does not come out of the United States, but rather Europe.

It especially involved veterinarian reporting in Italy, France, as well as the UK.

It involves high grade fibrosarcoma, one of the mostly deadly forms of cancer in both cats and dogs that formed at the site of the implant.

There have also been several reported cases of this form of tumor originating at the site of the implantation of microchips in pets in several other countries, including several in the United States.

However, the real question is how many have not been reported?

The list of potential health risks of microchips in pets does not end with tumors.

There have also been some reports of small dogs and cats that have hemorrhaged to death after an implant.

It is believed that the implants may cause both abscesses and infection.

There have also been reports were the glass from the implanted chip splitters off and migrate throughout a pet’s body and as a result, can lead to several other complications.

The next fact involves the major purpose of having microchips implanted in your pet; identification.

However, this is perhaps where the biggest misconception comes into play.

RDIP, or radio frequency identifications chips, are tiny galls cylinders that are about the size of a grain of rice.

It contains a radio transmitter as well as a tiny microchip with an identification number.

When a scanner is placed over it, it sends out a fluctuating magnetic field that is than picked up by the chips antenna which converts it into electricity.

This is where the problems start, and there are several of them.

Even though most all countries now have a uniform law requiring that the scanners that are provided can read the different brands, they may not be effective.

There have been several reported cases where pets have had to be scanned several times before anything registered.

Even if they are properly scanned at a rescue shelter, if the database is not up to date or accessible, they are no longer effective.

It is the responsibility of your veterinary hospital in most cases, to properly input your pet’s identification number and facts into this data base.

However, all of this also takes into consideration that if your pet does become lost, they will be turned into a rescue shelter.

shelters will not hold cats or dogs for long periods of time, and if the scanner process does not work properly, they will not be returned and will be destroyed.

If someone finds your pet and decides to adopt them on their own, there are currently no laws or any real reason for a veterinarian to scan a dog.

In fact, most veterinarians do not have the proper scanning equipment to complete the process.

There are several other alternative methods other than microchips in pets that are very effective and safer in accomplishing the identification process.

These are old fashioned pet collars that require no microchip implants, no data base, and have proven to be extremely effective for decades.

Tags immediately signal any type of shelter or any individual, that indeed this pet has a home.

It is universally recognized and can be purchased in several retail stores for less than twenty dollars and holds all the information needed to have your cat or dog returned.

A Top Tag ID consists of a small 64MB flash drive that comes in a waterproof case and also attaches to your pets collar.

program on this flash drive contains photos as well as all the pertinent information about both you and your pet that are needed to for identification.

The pet protector system is a 24 hour nationwide emergency system that is very similar to Medic Alert. All the vital information about your pet is available instantly in the company’s database.

One simple phone call to a 24 hour emergency operator’s toll free number easily produces all of your pet vital information.

Tattoos have been used also as long as pet collars, and are very simple and totally harmless in any way to your pet.

They are a series of numbers and letters that are tattooed on some part of your pet’s body, usually their upper rear leg.

Pet shelters and rescue shelters look for these before they attempt to scan your pet. They can wear off over time and may not be accurate if you move, but if that is the case, simply update the tags.

Microchips in pets, despite all of the moral controversy, have several potential hazards that all owners should consider.

The fact that it is not required to report all of the adverse effects should lead the list of concerns.

It is your pet and your decision, but you should consider all of the facts first.

Collars have worked for generations of owners and dogs and have absolutely no potential risks.

They cannot float in your pets system nor can they cause cancer. It is also virtually impossible to under report the adverse effects of collars; they have none.

Alternative Products for Microchips in Pets