Mange in dogs is a very common skin condition in most any breed of dog.

While most any dog has a few of the parasites that cause this disease present in the skin at all times, dogs which develop this disease have a defect within their immune system.

MANGE IN DOGS CAN BE FRIGHTENING

The defect that generates this disease is known as a “T-cell defect” and your canine can no longer keep the number of mites under control.

There is one thing that is very certain about this skin disease in your pet, the mere mention of the term “mange” can scare the daylights out of most dog owners.

Although mange is almost uniquely a dog’s skin disorder, it has been known to also affect cats, although it is not very common.

Mange in dogs is caused by varies species of mites and it has three distinctive forms, Demodectic, Cheyletiella, and Sarcoptic Mange.

There are a limited number of treatment options for mange in dogs.

But as is the case with any condition or disease that may affect your canine, preventive health measures can go along way to ensuring that your best friend lives a long and very healthy lifestyle.

With Mange in dogs, this mite infestation causes demodicosis, or red mange disease, the most common form of mage in dogs, primarily because your pet’s immune system is not strong enough.

There have been several studies that have shown that “dermatoses” represents a diverse group of disorders affecting dogs immune systems,.

Overall conditions have been greatly improved with specific types of supplementation, specifically Vitamin A, Zinc, Vitamin E, as well as fatty acids and certain enzymes.

Zinc is a co-factor in several enzyme systems, stabilizes cells, and is involved in several immune functions.

Vitamin A helps to modulate immune response and suppresses gland secretion, but more importantly has a normalizing affect on “keratinization”.

Keratin's are the main constituent of the structures of the skin, so it is especially important to your canine in fighting this disease.

Vitamin E is a natural antioxidant and a mild antagonist of leukotriene formation.

WHY VITAMIN E IS SO HELPFUL 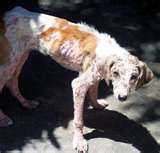 Fatty acids are also important in fighting Mange in dogs

This helps in building your canines lipid mediators, which helps there inflammatory responses.

They will need all of this protection in their systems, as again, most of these mites are present in every dog.

Because of this it will all depend of how you as an owner have helped to build there immune system with supplementation.

With mange in dogs, Demodectic (or Red Mange), is the most common and generally attacks dogs less than two years of age.

The mites that carry these bacteria are usually passed from the mother to the puppy.

They live in the hair and the oil follicles of the skin. The mites in this disease are very difficult to spot, and can generally only be seen in a microscope, as they are that small.

Because they are so small and hard to identify, they are more of a threat to your friends immune system, all the more reason for building their systems up.

The first signs of this form of disease will be patchy areas of hair loss around their hind body and the forelegs, and surprisingly they will not itch or appear inflamed.

However, in most cases, the condition will worsen until the skin in exposed.

Once the skin becomes exposed, immediate veterinarian care will be required, as this puts your pet at risk for other potential skin diseases.

Some lines of purebred dogs will have a lower resistance of the immune system, making them more vulnerable to this form of the disease.

Those breeds, although not inclusive, include Afghan Hounds, most all Terrier breeds, Chihuahuas, Collies, Dalmatians, Bulldogs, German Shepherds, and Great Danes.

This form of this disease can also begin as localized infestation and develop into multiple hair loss areas on your dog, making it even potentially more dangerous.

The second most common form of mange in dogs is Sarcoptic mange, also known as the scabies.

This bacterium in this infection is carried by a spider-like mite that will actually burrow through layers in your dogs skin.

This will cause your pet intense itching and inflamed and very, very red skin.

This form of mange in dogs is especially dangerous as it is spread from one mature dog to another by direct contact.

However, it can actually be spread simply by playing with one of the infected dog’s toys.

After a period of time, your pet’s skin will start to become very crusty.

This is the form of mange that scares dog owners the most; as you can be infected by your dog and will start to itch as well.

This disease as it carried over to humans was once referred to as the “seven year itch.”

Skin damage to your pet caused by this form of the disease may take weeks, or in some case months to recover, and may require several medicated baths.

The final form of is Cheyletiella mange, which is also know as walking dandruff, or psoroptic mange.

This form of the disease affects primarily puppies and it is caused by a larger mite that can actually be seen with a magnifying glass, so it is much easier to spot and diagnosis.

It is referred to as walking dandruff because dandruff like substance will appear on your puppies back, neck and in some cases, the head.

It is very contagious, but is usually short in duration and causes only a mild itching for your pet.

Today’s’ treatment of mange in dogs will involve the usage of a drug called Ivermectin that will be administered in two doses, that are two weeks apart in duration, to kill the mites.

Treatment may also involve steroids for a short time usage and only to control the itching and provide your canine friend some relief.

The itching usually starts to dissipate within a few days of treatment.

It is extremely important to note that these series of mange in dog diseases can emulate other skin diseases, and diagnosis should not be done by anyone other than your veterinarian.

There are also some very effective herbal remedies for relief in your pet.

However building their immune system and helping them to prevent the disease to start with, or at least making it a lot less severe, is something all dog owners should consider.

Pet Medications for Mange in Dogs