Dogs yeast infections are common in most all dog breeds and if not treated it can lead to skin lesions, sores, and can reproduce very rapidly to abnormal numbers.

It can also become a toxic situation that could very easily affect their immune, nervous, and endocrine systems.

HAS BEEN IGNORED FOR SEVERAL YEARS

For several years it was not treated seriously, but it is now identified as potentially causing allergies, bladder infections, and several other potentially serious conditions.

Yeasts that affect your pet are single cell organisms that are found on the surface of every living thing including your dog.

There are two basic types of yeast infections that will attack your pet if not treated properly.

They are Candida albicans which is yeast found in their digestive track and Malassezia, which is the yeast that attacks their skin and ears.

When your dog’s immune system is fully functional it is able to control and destroy these organisms.

However if it is weak in any fashion, this organism than becomes a voracious feeder that will grow and multiply in astonishing numbers and attack your dog’s systems.

THE TYPES OF DOGS YEAST INFECTIONS

For several years it was thought to be a skin allergy and only recently burst on the scene as being a yeast infection.

If this form of infection is in the ears, it is thought to be a secondary pathogen, meaning it is not the actual agent that causes the infection or disease.

However, it is now recognized as the primary agent in the skin.

It was also believed to be caused by allergies, but has now been identified as the cause of several types of skin allergies, a complete reversal.

It can and does attack dogs of any age, breed, or sex but is very uncommon in cats.

Large breed's dogs such as German Shepherds and Shetland Sheepdogs are very susceptible, as well as West Highland Terriers. However, Chihuahuas and Poodles are also at a much higher risk. 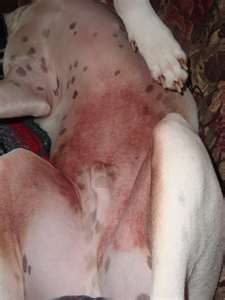 This form of dogs yeast infections is generally caused by hereditary infectious diseases that weaken the system.

There is a cell in your dog's body called the T lymphocyte cell that protects against bacteria, viruses, and other organisms that have already infected a cell and are growing inside of the cell.

However, when your dog’s system is weak, these cells no longer protect your pet.

The second type of yeast organism, Candida albicans, lives in your dog's digestive tract and survives by consuming sugars and fats in your pets system.

It will usually pose no threat at all to your dog and lives in a balance within your pet.

It is kept in balance by a substance called Lactobacillus bacteria found in the digestive tract that produces lactic acid.

But when that balance becomes uneven, this fungus than rapidly multiplies as well, and will travel to several part of your pet's body through the bloodstream bypassing this acid.

Once released, it is also able to multiply very rapidly.

THE SYMPTOMS TO WATCH FOR

The first symptoms you will notice usually start to surface in the summer when the humidity is very high, and your dog's skin begins to itch.

Naturally, your dog will scratch this itching which will than start sores to surface.

The symptoms could be either localized, or generalized, meaning that they cover a large portion of your pet's body.

If it is generalized, your pet will start to actually stink as the yeast is spreading and causing the hair coat to become greasy and oily. If severe, you will see both skin lesions and sores.

Symptoms of the stomach yeast infection will center initially on the bladder, if severe it attacks the liver.

TREATMENTS MUST INCLUDE ZINC AND COPPER

There are several ways to treat dogs yeast infections, but there is growing evidence that yeast infections may be caused by grain based foods and a lack of certain minerals.

The conventional treatments will be based off what is believed to be the underlying cause such as bacterial infections or seborrhea. Medicated shampoos will be the most common treatments.

Localized treatments of small areas will be treated by anti-bacterial cream.

Anti-fungal shampoos will be used in very severe cases.

Vinegar affects some dogs adversely, but yogurt appears to be extremely effective in the digestive form of infections.

However, as in most all types of treatments, the best method will be in the preventive stages with your dog.

There are two minerals, zinc and copper that will be a tremendous help in preventing dogs yeast infections.

Zinc is required by your dog in the production of nucleic acids which are the building blocks of the body as they assist both RNA and DNA.

They also assist with the metabolism of proteins, fats and carbohydrates which help to keep the stomach form of yeast in check.

But more importantly it binds protein and fat together which is exactly what this single cell organism waits to attack when the cells become weak and do not bind together.

It also plays a huge role in your dog's body in normalizing swelling and heat, the other growth area of yeast.

Copper is perhaps nature's finest anti-fungal agent and in several tests have proven that a deficiency of copper causes yeast infections.

Zinc is also known to deplete copper in the body, and as a result copper and zinc should always be taken together.

Dogs yeast infections are very common and can be both irritating as well as very dangerous to your pet.

The proper preventive nutrients can help to stop it from ever occurring and can save your pet a lot of unnecessary pain.