Stop Dog Itching Naturally
The key is understanding the “itch threshold” of your dog.

Are there any natural remedies to stop dog itching that will actually work, or is this an old wives tale?

The answer to this question is yes there is, but the real key is to understand two things: what the actual cause is as well as the “itch threshold” of your dog.

The first step in selecting the most effective natural remedy to stop this itching is for an owner to understand what is referred to as the “itch threshold”.

Even though itching in dogs is perhaps the one single aliment that will affect every dog at some point in their life, the “itch threshold” is one of least understood issues among dog owners worldwide.

Just like humans, every dog without exception will have a threshold of pruritis, which is more commonly referred to as an “itch threshold” which is different in every dog.

When your dog begins to scratch in any way at all, the underlying sources that are working against your dog’s immune system are at work.

They have just crossed over or exceeded their particular threshold.

However, understanding the actual threshold can be a bit confusing to any owner as and here is a perfect example of why. 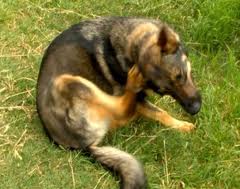 Dog itching can be stopped cold by fish oil

Your dog has an allergy to house mites, but for some reason it is very mild, so your dog will never scratch at all.

The reason is because this particular allergy never causes their immune system to exceed their itch threshold.

However, if your dog comes into contact with just one flea, it could throw them way over their threshold.

As a result, the itching will not only begin, it can easily become intense.

This example of dog itching is where your dog would have what would be described as a 40 on the itch threshold chart, which is considered to be low.

Your dog has an individual allergic reaction to fleas that causes his immune system to create 45 itch units to his system.

Because it is greater than his individual threshold can tolerate, his reaction to fleas throws him over the 40 unit mark and he will begin to itch.

In this example your dog has a much higher threshold that is measured as 60 units. He too has a mild allergic reaction to fleas, but it measured at the same level as example one, which is 45 units.

Because it is well below his threshold, there is no threat of irritation developing.

However, he has also developed some type of a secondary infection that could be bacterial, viral, or fugal, and this causes his system to produce 25 more units.

Neither one of these issues individually will cause any type of irritations to occur.

However when they are combined and attack your dog at the same type, severe dog itching could occur as it would throw him over the safety zone of 60 units, even though it is much higher.

The final of the three thresholds is similar to number two, but it can easily involve three or more potential causes.

In this example your dog does not have a low threshold (40), or a high threshold (60), but instead is right in the middle with a 50 threshold.

He also has a very mild reaction to fleas at 30 units, but is also very allergic to mold.

He has just been exposed to mold which affects his system at 15 units, as well as a slight secondary skin infection that is causing drier than normal skin.

When all three attack his system at one time, is shoots past his 50 unit threshold and severe itching begins to occur.

The next step in finding the right natural treatment for dog itching is to identify the potential cause, and leading this list is an allergic reaction to fleas.

This is by far and away the leading cause not only in the United States, but worldwide as well.

However, what most owners do not realize is that in over 50% of all cases you dog can become affected by just one flea bite.

Other skin diseases that can trigger this condition include Atopy, which is an allergic reaction to airborne pollen's, food allergies, as well as insect allergies.

However, the list is still not complete as it could also be the result of parasitic skin diseases such as scabies, demodectic mange, as well as ear mites or lice that attacks your dog’s skin.

The most powerful of all the fatty acids for dogs is fish oil, for one simple reason; their natural interactions.

All fatty acids have what are referred to as chains, but for some reason fish oil is extremely adaptable to a dog’s body without the need for a conversion process.

Next on this list of natural remedies for dog itching are several homeopathic remedies that include the herbs Calendula, Sulphur, and Urtica urens.

When you are using this method as a treatment, it is important to understand that the entire thought process is you are using “like cures like”, but in very small applications

Calendula is extremely powerful for soothing any type of heat pain caused by intense itching, and it also helps to promote natural healing.

The best way to use it is topically in very small amounts several times a day, until the fish oil can act internally.

It is also very affecting at treating most all kinds of scrapes or cuts, as well as any type of sunburn that may affect your dog.

Sulphur is the next of the natural remedies for dog itching especially if their coat has become very dry and rough as the result of the breach of their threshold.

It is also very effective at removing fleas or mites but unless you are very well versed on how to bath your dog utilizing this herb, you are much better off simply applying it topically.

You would than use warm water and a clean wash cloth several times a day until the dry skin and irritations begin to recede.

The next homeopathic herb is Urtica urens which has been used for centuries to treat any kind of skin irritations, including dog itching.

In very small dosages it is extremely effective at easing the pain as the result of rash, insect bites, burns, and virtually everything that is associated with severe skin irritations.

The more traditional natural remedies will include good old fashioned oatmeal soakings where you would heat up oatmeal in hot water than place a small but thick wash cloth or hand towel in the emulated solution.

You than take and let it cool down to where you can handle it, and then gently rub all areas of your dog’s body where the irritations are occurring.

There is, however, one other very important natural treatment you should include in your arsenal; thiamine supplements.

This is perhaps the most powerful natural treatment for dog itching for one simple reason; fleas absolutely hate the smell of it.

If you combine it with fish oil internally, and these other methods externally, you can easily win this battle.