Chip, the miracle dog, or as we call him, Chipper, is also being called the medical mystery wonder dog.

Today’s date is 2/7/2012 and all facts can be fully documented by the White house Animal Clinic located in White House Florida, which is a suburb of northern Jacksonville.

The veterinarian that conducted this case was Dr. Susan Thoma who has a very successful and highly recommended office, and she is the one that began to call Chip the miracle dog.

We took Chip in for a routine examination in April of 2011, where he was diagnosed with Lymphoma cancer in dogs as he had a huge growth right next to his spleen.

Originally we thought his spleen might have ruptured, and after this diagnosis, we were devastated as we had just lost our 15 year old Dalmatian two months earlier.

Chipper is a rescued dog that we have had for eight years, and found him after someone threw him out of a car window in a field to die.

Naturally he is very special to us, and perhaps this was his first step in becoming a miracle dog.

This picture shows the size of the growth, what ever it is, as soon as it was removed. Chipper is underneath the linen. 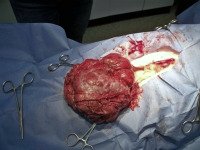 This is the actual growth that came out

However, once this diagnosis came in, instead of doing nothing, we immediately went to a homeopathic pharmacist in Jacksonville and asked him for help and what he could do for this form of cancer in dogs.

He immediately did three things; placed him on a powdered multivitamin, a powdered immune builder, as well as a cancer specific prescription for this form of cancer.

We started Chipper on this plan as he was given only 6 to 9 months to live at the best scenario and we wanted as much time with him as we could get.

Chipper responded positively very quickly as we were told that he would begin to stop eating as the cancer advanced and we would have to make the decision when to put him down.

However the complete opposite begin to occur; his appetite actually improved.

Not only did his appetite improve, but he had more energy than ever before but there was still one very strong negative; the growth continued to grow.

In fact, last week, 2/2/2012, it had become so large that it was affecting his breathing and we discussed the options of taking it out or let it run its cycle.

We made the decision to have it taken out and prayed that once he was opened up it had not spread where we would have to make that dreaded decision to put him down.

Dr. Thoma told us if we did not hear from her during this process it was good news, if we did hear, to be prepared to make that dreaded decision.

And then we waited some more.

Finally after 4 hours and no news, we finally called and were told that it was very good news.

However, there was also some very strange news, and the miracle dog murmurs begin to develop.

Here was the final outcome and it is very good and indeed very strange.

First off this growth was definitely interesting as it was between the size of a grapefruit and a basketball as it was that huge.

However, it was not attached to any organ other than a very small sliver attached to his liver.

Dr. Thoma, who has practiced veterinary medicine for over 23 years, said she had never seen anything like it. It did not look like cancer of any type or was it a fatty tumor.

So we sent it to the lab, and today, 2/7/2012, we got the final results. It is not cancer but it is something that no one has ever seen before, and because of this, the miracle dog talk has begun to spread.

In fact, the lab it was sent to is sending it to another lab to determine what it actually is and if they cannot, they are sending it to some veterinary schools for their opinions.

Did these high potent powdered vitamins and immune builders really make this much of an impact? I will leave it for you to decide but to me there is no doubt it made the difference.

We had him on supplements, but when they were fortified to this strength, all this begin to happen.

He is now running and jumping less than a week after surgery even with 15 staples in his stomach.

We are trying to keep him resting but at some point you just cannot stop this amazing process.

Hopefully this article will help someone else and make your pet the next miracle dog.

We have now had his staples removed and the entire staff at the animal hospital is just shaking their heads as they have also never seen a dog recover this fast.)

(Update--Sadly we lost Chipper on 8/1/2016. This growth came back about 60 days prior and this time it was Cancer--in several places. The additional nutrition still gave us 4 more years and he was in very good health until these last couple of months.)

Pet Medications and The Miracle Dog