Dysphagia in dogs can be mild, or it can become so severe that your dog can not eat simply because they are having a very difficult time swallowing.

This condition may be localized and centered around one primary area in your pet, or it may be something much more serious. If not corrected, it could cost your dog its life.

Your dog can not swallow properly.

Dysphagia is a medical term that is used when swallowing is difficult and in humans it feels like food is sticking in your throat or chest.

It is basically the same condition in your dog, as they are having difficulty swallowing both solid foods and liquids.

THE SYMPTOMS OF DYSPHAGIA IN DOGS

If you suspect that your dog has this condition you will need to have them examined as soon as possible as it can produce several symptoms.

Dysphagia has several symptoms that your dog will show you ranging from mild to severe.

The first sign of Dysphagia in dogs will be a sudden or developing drooling.

Large breeds will naturally drool due to the structure of their mouth, and other dogs may drool from excitement.

But there will be two issues with drooling with Dysphagia.

It will cause drooling in dogs that have no real history and in severe cases, there will be blood in the saliva.

The next set of symptoms will be your dog gagging while they are trying to eat or drink, and then look as if they are making several attempts to swallow.

They may also drop food from their mouth or start placing food in one side of their mouth, as it may be easier from them to swallow in this manner.

But none of these symptoms are normal.

As this condition advances, it may also cause coughing and the regurgitation of the food they have just eaten.

Coughing in dogs is a definitive warning sign that something is wrong.

Along with these set of symptoms, your dog may also develop a weakness in their muscle mass in several parts of their body.

However, there are some very dangerous symptoms that will tell you that not only do they have Dysphagia in dogs, but it is a critical state and needs immediate attention.

The first critical sign will be a foul smelling odor coming out of the mouth that may or may not be associated with a nasal discharge.

Your dog may than start having pain around their mouth, as well as their head and neck area. 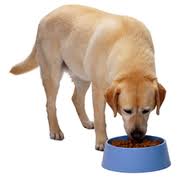 Dysphagia in dogs can be helped by licorice

If it has become extreme, you may see physical deformities develop in the neck and possibly the head.

The leading cause of Dysphagia in dogs is disease in the peripheral nervous system; specifically cranial nerves, which is the nerves of the head.

However, it could also be caused by hypoglossal nerves, the nerves of the tongue, and the trigeminal nerve, which is the nerves of chewing in your dog.

What makes this system especially dangerous if diseased is that the cranial nerves functions in pairs with the sensory portions of reflex carried in one nerve and the motor nerve carries in another.

Each cranial nerve may be affected by a selective immune disorder; but an immune disorder of the peripheral nervous system will effect of the nerves within the entire system.

As a result, it can affect the head, the tongue, and the motorized function of chewing in your dog all at the same time.

If this happens, it is a very severe situation.

Inflammation of your dog’s chewing muscles is the next possible cause, and this is referred to as MMM, or Masticatory Muscle Myositis.

This inflammation attacks your dog’s muscles that chew and are affected by an immune disorder of their muscle fibers.

This inflammation can develop very gradually and you may no idea they have it until it becomes severe; or it can suddenly explode in your dog.

This inflammatory disease can affect any breed but it is much more common in large dogs.

Inflammations of the tongue, gums, or mouth are also potential causes of Dysphagia in dogs as well as some form of traumatic event that may have affected these areas in your dog.

The other potential causes may include diseases of the teeth, immune disorders of the nervous system, or airway diseases that block the throat or mouth.

Your veterinarian will have to perform a very detailed system of diagnostic exams to uncover the actual cause of Dysphagia in your dog.

In most all cases, the actual cause can be determined.

BOTH CONVENTIONAL AND NATURAL TREATMENTS

Once that has been completed, your dog will most likely require nutritional support as the underlying cause is being treated with antibiotics, surgery for infected teeth or upper airway abnormalities.

However, Corticosteroids for the inflammation may also be used.

Your dog will have to immediately change to a diet where the consistency is such that they can actually swallow it.

They may also have to be fed by a stomach tube that bypasses both the mouth and throat.

Licorice supplements will help with the inflammation once is has been properly diagnosed.

Licorice root has been used for centuries for treating inflammation and will have a very soothing effect in your dog.

It contains a compound that is 50 times sweeter than sugar and will act as a demulcent in both soothing and as an expectorant, especially important in helping your dog swallow.

Dysphagia in dogs can develop very slowly in your pet, or it can explode. This is a medical condition that must be treated very seriously as soon as the first symptoms start to appear.

Not being able to swallow properly is definitely not normal and can and will be very threatening to your pet.

Pet Medications for Dysphagia in Dogs