Dogs Lyme disease is the fastest growing infectious canine disease in the United States and it shows no signs of slowing down. It was not even recognized until the mid-1980’s.

But it has now burst out with such ferocity the veterinary medical community is becoming very concerned with it.

WAS ONCE VIEWED AS VERY RARE

This disease was once viewed as an obscure and very isolated infection and thought to only exist in the North Eastern portion of the United States.

However in the canine world it is now following the same path as with humans.

In fact, it has reached almost epidemic conditions for dogs. According to the Center for Disease Control and Prevention (CDC), Lyme disease has doubled over the last ten years.

It also can affect cats, but dogs are twice as likely to become infected.

Based on pet insurance claims by Veterinary Pet Insurance (VIP) which is the nation’s oldest and largest provider of pet insurance dogs Lyme disease is growing.

In fact, it has now lead the nation in the reported cases of canine infectious diseases for three years in a row.

It is growing as fast if not faster than the same condition in humans and has also now been reported in over 47 states.

It is also becoming very frustrating for the veterinary medical community as there is a lack of accurate diagnostic testing for this disease.

It is now believed that dogs are at a much higher risk of contracting the disease than humans.

WHAT IS DOGS LYME DISEASE ?

Dogs Lyme disease is also called Borreliosis and it is an infectious disease that is carried by deer ticks.

The type of tick will vary depending on the part of the country and they are all referred to as spirochetes. Your dog becomes infected when they are bitten by this tick.

It is very difficult to diagnose as it can affect several parts of your dog’s body. But the real perplexity with this disease is that it produces a wide variety of symptoms that resemble many other forms of disease.

It is still very young in the medical community and there is a lot to learn and understand about the effects as well as the treatments. 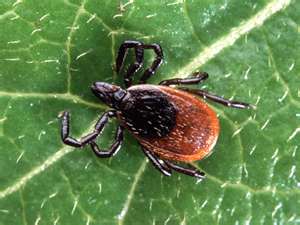 As the number of the deer grows in population throughout the country, so does your dog’s chances of becoming infected.

But there is one thing that is absolutely certain with this disease, it is the fastest growing infection in dogs and can no longer be ignored.

TICKS TRANSMIT IT BUT DO NOT CAUSE IT

It is important to remember that these ticks do not cause this disease, they simply transmit it.

The ticks are most active from April through November, and the tick that actually transmits the disease is very small and hard to spot on your dog.

They are only about the size of a poppy seed and once they have bitten your dog, they will have to stay on your dog at least 24 hours before they can actually affect your pet with dogs Lyme disease.

This tick actually gets the disease by feeding on a Paramycus, which is a very small white footed mouse that carries the disease.

What is believed to be spreading this infection so very rapidly to the point of becoming an epidemic, is that ticks will first infect several types of migratory birds and they than be carried by the birds throughout the country.

The symptoms with dogs Lyme disease are much different than they are in people, and also take a much longer time to surface, which adds to its difficulty.

It can often take as long as three to five months for the first symptoms to actually appear with this disease.

Once they do start to appear, the first symptom will be a very high fever, usually between 103 and 105 degrees.

The next symptoms will be a loss of appetite, swelling of the lymph nodes, and lethargy.

However, the most common symptoms to have developed thus far are swelling in your dog’s joints which are then followed by lameness.

In very severe cases, it has progressed to the kidneys causing kidney failure resulting in the loss of your pet’s life, but so far this is quite rare.

TREATMENTS DO NOT ALWAYS WORK

There is a vaccination for dogs Lyme disease, but it has not worked in several cases now as it is growing so rapidly that it is becoming very challenging.

Treatment is usually in the form of tetracycline or penicillin antibiotic.

Your dog will have to be treated for three to four weeks for it to be effective. In several cases, it may be much longer.

It is also been found that some pets may never actually be able to get rid of dogs Lyme disease, while others have responded to this treatment.

However, this is an infection that does not produce immunity once it is shed, as it can be caught again.

Prevention, like all types of tick, mite, or fleas bites that spread disease, can be prevented with various types of tick and flea control programs.

However, with the epidemic proportions that this disease is growing at, there are other natural treatments you should consider trying as well.

Building your dog’s immune system is critical with any infectious disease, but so is preventing it. There are two very effective natural treatments for dogs and tick bites. The first is vitamin B1, Thiamine.

Fleas and ticks absolutely hate the taste of thiamine. One daily supplement could help to prevent ticks form sticking to your dog.

The second is garlic supplements or a garlic spray.

The Internet is full of articles on how dangerous garlic is for dogs, but nothing is further from the truth.

Both fleas and ticks also hate the taste of garlic.

By simply spraying a few doses into your dog’s food daily it will work into their system very quickly helping to prevent Dogs Lyme disease.

Ticks will still bite and attach to your dog as that is what they are made to do. However, they will very quickly crawl back off when tasting either of these natural tick repellents.

Dogs Lyme disease is the fastest growing infectious disease in the United States. Protecting your pet with both standard tick programs as well as natural treatments can only help them.

If all of the current treatments worked that effectively, this disease would not be in this epidemic stage right now.

You need to give your pet as much protection as possible with this disease.