Calming dog anxiety naturally is much easier than most owners realize, but the process is still very difficult for one reason; it can be very challenging finding the actual cause.

However, once you find the cause, there are several conventional as well as natural ways to treat it.

In fact, there is a growing consensus among owners that natural methods of controlling anxiety are not only safer, they are much more effective.

Calming dog anxiety is extremely important as it can affect the health of your pet very rapidly both emotionally as well as physically if you do not identify and then begin to treat it.

In fact, for years the medical community did not consider it a real threat to your dog’s physical health, but that all changed in the last few years.

Anxiety in dogs can be caused by several factors and while sudden loud noises such as thunder and fireworks are thought to be the leading causes.

However, in reality they are actually down the list as the most common causes.

Dogs by their very nature are born to live in packs and while that has dramatically changed throughout time, it is still inherently bred into them.

Once you acquire a dog as a pet, you may not realize it, but you just became their pack, and this is perhaps the single largest factor to remember in calming dog anxiety.

It is for this reason that by far and away the leading causes of anxiety are some type of change in your environment that directly affects your dog.

This can include a new house or a yard, any type of a new pet including another dog, as well as a new baby in the family.

All of these factors should be considered when you try calming dog anxiety, as you have just disturbed the only thing they inherently trust; their pack.

Any type of an extended absence by you, their owner, is also one of the leading causes, as well as moving into a totally new environment with new owners.

If you adopt a dog, it will be very important to understand mentally what your new family member may be going through emotionally.

However, the list of causes is still not complete as dietary changes may also trigger it, the loss of another pet in the family, as well as a flight or long travel in a car they are not used to it.

In some cases, anxiety may also be the first sign of a disease that your dog has, although it is not nearly as common as these other causes. 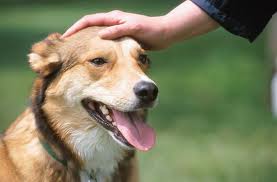 Watching for the signs of dog anxiety is the first step

THE SYMPTOMS AND WARNING SIGNS

Success at calming dog anxiety also includes the symptoms to watch for.

One thing a lot of owners overlook are any signs of a possible fight your dog may have gotten into, or even a scrape with a cat.

The reason for this is quite simple; chemical releases.

When your dog undergoes any type of a dramatic change or something that their immune system identifies as a threat, it will immediately release a chemical.

This release leads to anxiety, and if you do not catch it fast enough, it can very rapidly weaken their overall immune system.

The first real symptom that you want to watch for is any type of a sudden irritability that is quickly followed by a sudden and often uncontrollable shaking.

Even though the shaking may not last long, damage is already starting in your dog’s immune system.

The next set of symptoms will be sudden episodes of excessive licking or chewing that can rapidly lead to hair loss, which in turn can lead to potential infections.

Sudden bouts of excessive barking, especially in dogs that are normally quite calm, are also real warning signs, as well as chewing or scratching furniture.

Although scratching furniture or other objects is common in puppies, it is anything but common once a dog passes the one year old mark.

But there are also several other real warning signs that can help you in the process of calming dog anxiety.

If your dog starts to sniff the ground excessively or begins to turn their head and flick their eyes to one side very quickly, this is yet another warning sign that your dog is anxious.

This is one of the commonly missed signs but one of the most telling, and if you even think that you have seen it, try approaching your dog at an angle.

By approaching at an angle it will relax your dog preventing the release of any additional anxiety chemicals. But there is still one more warning sign you can watch for; yawning.

Yawning in dogs is much different than in people and it is a real signal that your dog may be anxious.

The next time you take your dog to the vet, watch for this.

You most likely have seen it and paid it no attention at all, but unless your dog is extremely comfortable at the vet, this is the complete opposite of being relaxed as they are actually quite anxious.

There is medication that your veterinarian can prescribe if the anxiety is quite severe such as Valium or Prozac which contrary to some misconception, can be given to dogs, but they do have side effects.

However, there are also several natural treatments that can be extremely effective and they include two herbs; chamomile and passiflora incarnate.

Chamomile has been used for centuries to treat anxiety in both people and dogs, and is also used to heal wounds as well as treat skin infections.

Passiflora incarnate has also been used for centuries and any natural method of calming dog anxiety should include this herb, as it is that powerful.

It's major function is reducing restlessness in your dog which can very quickly put a stop to several destructive tendencies.

These will include scratching themselves or your furniture, as well as flickering of their eyes.

However, when selecting this herb directly or as an additive it is very important that you focus on the leaves and not the body of the plant itself, as the vast majority of the benefits is isolated to the leaves.

A major brand of powered form of this herb will most likely contain only the leaves.

Calming dog anxiety can be a very frustrating undertaking or it can be very easy, but the key is to understand the symptoms and the warning signs.

If you ignore them and the anxiety is allowed to continue untreated, it can cause severe damage to their immune system as more damaging chemicals are released.

Treating it with conventional treatments will work but they do have side effects, but there are virtually none with the natural treatments.

If you do use the herbal treatments, it is also very helpful to combine the powered form with powered multivitamins and mixing it into their food once a day.

This will help to build up their immune system just in case it is starting to weaken.