Aspergillosis in dogs is a fungal infection that generally affects just the nasal and respiratory systems,.

However if severe enough it can spread into your pet’s entire body with some very damaging and grave results.

If it becomes disseminated and travels throughout the body it usually becomes fatal for your dog.

WHAT IS ASPERGILLOSIS IN DOGS ?

This situation develops in the nose and sinus area of both dogs and cats, but is much more common in dogs.

All dogs are susceptible to this infection, but dogs younger than 3 years and older than 7 years account for over 80 percent of all infections.

This infection will generally remain confined to just the nasal cavities or the sinus areas and as a result a moderate to medium destruction of your dog’s turbinates occurs.

Turbinates are the very small and very delicate bony structures found in the nasal areas of your pet.

This form of fungus is very common and is found throughout the environment.

All dogs will come into contact with fungus at some point in their lives and dogs with strong immune systems are generally not affected.

Dogs with a weakened system or that have had prior sinus problems will be a lot more prone to be attacked by this fungus.

However, dogs that have had any type of a prolonged antibiotic therapy, are undergoing chemotherapy, or have diabetes are also very susceptible to the more deadly form.

Your dog catches this fungus by inhaling the spores in the environment.

Once in the nasal passages it attaches to the mucous membranes where it develops into a fulminating form where it can literally explode throughout the body if not caught and stopped.

There are two types of Aspergillosis in dogs, nasal and disseminated.

The impact of this infection will vary tremendously depending on whether it stays confined to just the naval cavity or if it becomes disseminated.

This means that it has spread throughout the entire body.

The nasal form of this infection is very common with breeds that have long or medium noses, and is very rarely found in breeds with short noses.

This form of the disease produces a very painful discharge in your pet that will consist of blood and pus and can result in nosebleeds.

It is extremely painful for our dog and an ulceration may occur as a result. If caught early, this form can easily be treated.

The second form of Aspergillosis in dogs is known as disseminated aspergillosis and seems to attack larger breeds, but far and away the most attacked breed in the German shepherd.

With this form of the infection it is believed that the fungus enters your dog though their respiratory tract and than goes directly to the lungs.

Once inside the lungs it is carried by the bloodstream where it now is free to attack everywhere in the body.

Infections may attack the spine, eyes, or kidneys; as well as other major organs, muscles, or bones.

Once this happens, there is very little chance of survival for your pet. 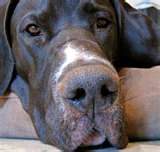 Three symptoms to watch for with Aspergillosis

SYMPTOMS TO WATCH FOR

There will be three very distinctive symptoms of Aspergillosis in dogs that you will need to watch for.

It is extremely important to understand that this not just a running nose; and if you catch the symptoms early, especially in large breeds, they will have a chance of recovering.

The first symptom will be a very profuse and clear discharge from the nose.

This is usually not anything serious, but if it starts to vacillate back and forth between a discharge and a bloody nose, it should immediately alert you that something is wrong.

If you do see this happening, check your dog’s nose very carefully.

If it is painful to your pet when you touch their nose, you will most likely also find ulceration's on the external portion of the nose.

You will know ulceration s when you find them as they will almost resemble cold sores.

If the situation has become serious where it has disseminated, your dog will start to lose weight very rapidly as their muscle is wasting away.

CATCHING IT EARLY IS THE KEY

There is one very important thing that you can do to save your pets life with this condition.

If they are a larger breed and contract this disease; you have to catch it early and you have to have it properly diagnosed.

In most cases where it has disseminated, it is usually too late to do anything.

In diagnosing this disease it will be extremely important that you tell your veterinarian of the symptoms that you have seen, as they will take swabs of the infected areas.

However, all dogs will have some form of fungus in their nose and you need to insist that radio-graphs are used to look for sinus and nasal destruction.

Blood tests also help as they will be a lot more accurate than swabs.

With nasal aspergillosis your dog will be treated with systemic and topical anti-fungal drugs.

In the systemic form medications such as itraconazole are used but it only has about a 70 percent cure rate.

With topical treatments, anti-fungal drugs such as enilconazole are implanted in your pet’s nose and the success rate is ninety percent or higher.

If the disease has become disseminated; the systematic form of treatment is used, but it may be too little and too late.

As with most any disease in your dog, building and maintaining their immune system with a balanced diet as well as vitamin and mineral supplements can prevent most any type of bacteria.

They also help virus or fungus infections from overpowering their natural immune system.

But with this particular fungus infection watching for and identifying the symptoms early in Aspergillosis in dogs could be the difference between life and death in your dog.

Treatments for Aspergillosis in Dogs