Yeast infections in cats, is it possible? The answer to the question is yes; your cat can definitely get this type of an infection.

Yeast is found commonly on all cats’ skin and it is in most cases not any type of a health problem as it is found only in very small amounts.

However, if it starts to grow and reproduce in abnormally highly amounts, your cat will very quickly develop a problem.

If your cat really starts to smell and actually produces a rancid type of an odor, you should immediately suspect a yeast infection.

If the smell is followed by greasy developments in their hair coat, as well as a very sudden red and itchy underlying skin condition, there is no longer a doubt of what they have. 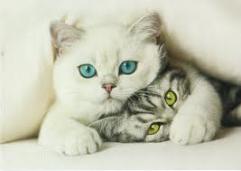 It should only be treated by a professional

Your cat has a flown blow case of yeast infection.

Yeast infections in cats are most often referred to as Malassezia dermatitis, and it can affect any cat, at any age, and at any time.

It will start out as a small rash, but will become extremely irritating and itching to your cat.

As they start to itch, their skin will thicken almost to an elephant type of skin appearance as it will become very scaly.

As the yeast spreads, it also become extremely rancid in smell and it is not a smell that has to be described; you will know it when you smell it.

WHERE IT IS FOUND

Yeast is a form of fungi, and these particular infections will be spore like in shape and they can affect only one part of your cat’s body.

However if the yeast is rapidly growing, it can spread to all areas of their skin and virtually cover their entire body.

It can also affect their ventral neck, their arm pits, or their perineal areas, which are the central tendons of the perineum, where their muscles attach.

Since this is a fungus, it will require fat to grow rapidly, and as a result it is also attracted to your cats sebaceous glands.

These glands are located on the face as well as several parts of their upper body, and if it grows rapidly, it causes a natural renewal of cells.

These cells will also produce a dandruff effect in your cat, which stimulates the itching.

Yeast infections in cats are generally caused by two different factors; a weak immune system or a condition that is known as yeast proliferation.

A weak immune system in your cat is most often a hereditary disorder or the result of an infectious disease of some type that has weakened their system.

This can include bacterial infections, an allergy, or seborrhea which have already irritated the skin and as a result has triggered the yeast infection.

Seborrhea is an abnormal secretion from your cat’s sebaceous glands and is often associated with abnormalities of keratinization, which is the formation of true keratin.

It can range in degrees of severity from dandruff to the formation of very greasy scales and crusts that will become severely inflamed.

There are two forms of seborrhea; primary and secondary. Primary seborrhea is rare in cats unless your cat is a Persian, in which case it is considered heredity and quite common.

Secondary seborrhea is most often associated with hypersensitivity reactions and autoimmune skin disease.

Autoimmune skin disease is a very strange but rather common condition in which your cats own immune system attacks the cells and causes the destruction of those cells.

If this occurs, there is nothing to slow down the spread of this fungal infection that is attacking your cat.

A yeast proliferation is a situation where there is an increase in the skin oils of your cat that is almost always the result of an allergic flare up of some type.

When this attack occurs, it sets off the autoimmune response, kills several protective cells, which than allows for the oil to build up and to basically run free.

There is one good quality about yeast infections in cats however, and that is this infection is not contagious at all to other cats or to humans.

If another cat has developed a yeast infection, it is entirely the result of that cat’s immune system as it cannot be transmitted.

It is extremely difficult to actually diagnose the causes of yeast infections in cats simply because Malassezia is present in healthy cats as well.

As a result of this, most veterinarians would suggest that the diagnosis is usually confirmed by the response to the treatments that are given.

The lesions in your cat that these infections have caused can be scraped or swabbed, or they may be taken off by simply using scotch tape.

Your professional could then identify the fungal growth under a microscope.

It will be easy to identify the fact that your cat has a yeast infection by the numbers of yeast cells that are present.

They will be higher than average but this still does not identify the actual cause.

Treatment for this form of yeast infections in cats will in most cases will be antibiotics.

However there is some disagreement in the medical community that antibiotic and steroid treatments actually increase the growth of yeast.

However, this has not been fully documented in cats. It is widely accepted that this occurs in humans, but as a rule cats do not have yeast infections reoccur after antibiotics are used.

Systemic therapy as a treatment is used in only the most severe cases of yeast infections in cats, as they can have some serious side effects.

In most cases, topical treatments and shampoos will be used, as well as vinegar and water rinses.

If your cat has a mild form of yeast infection, Selenium sulfide is used and it is effective in over 70 percent of all mild cases.

The most affective agent for this agent is found in a human shampoo, Selsum Blue.

Nizoral, another topical shampoo, is found in several countries in the world and is also a very effective shampoo for this condition.

Vitamins A and D are also extremely effective in fighting this form of a fungal infection, and are very inexpensive.

However, the cheapest way to maintain and effectively treat yeast infections is with a vinegar and water rinse solution that you can easily make yourself.

Simply place one-fifth vinegar to one tenth water, and mix it thoroughly, and then rub it very vigorously onto your cat’s entire body and then rinse it out.

This will take the smell out immediately and refresh the cells back to normal activity in most all cases.

Yeast infections in cats occur much more frequently that a lot of owners may be aware of.

It can be a very irritating ordeal for your cat, but in most all cases it will not be severe, other than the odor that it produces.

There is no way to describe the odor, but you will certainly know it when you smell it.