Pyometra in cats is a life threatening medical emergency that in some cases may require surgery.

In those cases that do not require surgery and if this situation is left untreated, your cat may not survive.

This disease will attack your cat almost exclusively from late February through August.

Although not very common, if your cats infected uterus erupts and spills into the abdominal cavity, your cat could die within 48 hours

However, in most cases, if treated promptly after discovery, the chances of survival are very high.

WHAT IS PYOMETRA IN CATS ?

Pyometra in cats is a disease that threatens all middle aged cats that have not been spayed and is a medical term for an infected uterus.

However, in the last few years it has been recognized as more than just an infected uterus.

It is now classified as a hormone abnormality in that a secondary bacterial infection may or may not be present. 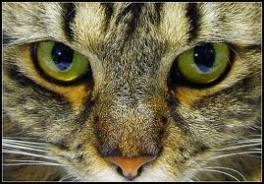 This disease follows the heat cycle in your cat where fertilization has not occurred.

If your cat becomes infected they will start to show symptoms of the infection within two to three months after their cycle.

THE CAUSES WILL INVOLVE TWO HORMONES

Female cats have two main hormones that are produced by their ovaries; estrogen and progesterone.

If your pet produces an excessive amount of progesterone or for some reason suddenly becomes sensitive to it, it causes Pyometra in cats.

In either one of these cases, your cat will start to produce cysts that will line along the walls of the uterus.

This condition in itself is not dangerous to your cat and it will cause no signs or symptoms in the early stages of the disease.

However, these cysts contain what is referred to as secretory cells that will start to grow and these cells can produce a variety of secretions.

This secretion or fluid can remain deposited within these cells themselves, or they may excrete and be released into the inside of the uterus.

By nature, your cat has a lot of bacterial growth that forms inside of the uterus and their immune system will release white blood cells that are accompanied by fluid as a response to this invading bacteria.

When this happens, the additional fluid and the white blood cells thicken the walls of the uterus, and in doing so, increase the size of it.

In normal cats, the uterus formation has a pronged like appearance that is about the size of a pen or a pencil.

However, when Pyometra in cats strikes, they swell and become large pouches that can grow over a foot long and about the size of a dozen pens or pencils in circumference.

As this disease starts to grow in your female cat the fluid will start to leak from the uterus into the vagina and eventually will spill out.

After a period of time, the cervix, which is a short thick tube that leads from the uterus to the vagina, will close.

Once that happens, it becomes a serious situation as now the fluids are trapped inside of your cat’s uterus.

However, your cat’s body does not that and continues to send additional fluids and white blood cells as it still trying to attack the bacteria.

As these additional fluids and cell counts infiltrate the uterus, it causes even more growth.

It does not happen often, but if the uterus suddenly erupts, it can cause the death of your cat with in 48 hours if an emergency surgery is not done and if you can’t identify the symptoms very quickly.

Your pets body will make every attempt in can to eliminate Pyometra in cats by trying to carry the waste and excess fluids from the bloodstream to the kidneys.

However, this amount of fluid is significantly more than the kidneys can handle, and as a result, it overpowers the kidneys.

When this happens, toxins build in the kidney and your cat goes into what is referred to as uremic poisoning, which will very rapidly lead to kidney failure.

THE FIRST SYMPTOM IS VAGINAL DISCHARGE

The first symptoms of Pyometra in cats that you will see will be a vaginal discharge.

Cats by nature are extremely tedious about keeping clean, and the first symptom you can watch for is a sudden and constant licking of their vagina.

It will be especially important to watch if this discharge is either slightly yellowish in tint or stained with blood.

If it is bloody, it is now an emergency.

This situation in your cat will almost always be followed by your cat drinking an extreme amount of water.

Their body is trying to replace the fluids it is using to attack the bacteria.

Other symptoms will include your cat suddenly being anorexic with no appetite at all.

They may also start to show flu like symptoms of vomiting and diarrhea.

With Pyometra in cats it will be extremely important for you to make as many observations as you possibly can to help your veterinarian with the proper diagnoses.

You will need to note when your cats last heat cycle was as well as were there any recent changes of habit that include symptoms such increased drinking or vaginal discharge.

The color of the discharge will be critical is critical to the life of your cat.

THE TOXICITY MUST BE TREATED

It is extremely important to understand that with Pyometra in cats toxicity has built up in your cat and it must be treated very quickly or it can take your cats life.

Most cats will have to receive intravenous fluids that may last for several days and can be very expensive.

However, the only real effective treatment at this point is to have your cat spayed.

By spaying your cat it removes the ovaries, oviducts, uterus as well as all of the blood vessels that have been over-reacted to by your cat’s immune system.

If your cat is a prized breeding queen, your veterinarian may recommend prostaglandin as well as antibiotics.

Prostaglandins are organic compounds that are derived from essential fatty acids that are present in most of your cat’s body tissues.

They can help to cause the contraction or the smoothing of muscles. In this case, they are used to reduce the size of the uterus and help it drain.

However, they can cause a wide range of physiological effects in cats.

If the condition is severe, the effects will be exasperated and will have to be stopped as it is too dangerous to your cat.

Pyometra in cats can very easily be prevented by having them spayed as early as possible with the recommended age being the six month old mark.

If you are going to breed your queen, it is highly recommended that you stop breeding when your veterinarian recommends.

It is very difficult to determine the actual age to stop breeding, but for the safety of your cat, it is much better to error on the side of precaution rather than risk their lives with this very serious condition.

Pet Medications for Pyometra in Cats