Pneumothorax in cats can cause a difficulty in breathing in your pet, especially when they try to inhale.

If it is severe enough, it can very quickly turn your pets tongue, gums, and lips almost totally blue in color.

If your cat experiences this condition, they may become very restless and begin to lie in an upright position as they are trying to breathe. But this unique danger in cats does not just end there.

If it becomes infected, it can cause very serious lung as well as chest infections.

WHAT IS PNEUMOTHORAX IN CATS

If these wounds or ruptures are not checked immediately by your veterinarian, it can become a life threatening situation for your cat.

Pneumothorax in cats is a condition where there has been an abnormal amount of air that has entered into their chest cavity.

Once there it is restricting the lungs from operating properly, especially when they try to inhale.

It is a collection of air or gas in their chest or pleural space that has caused part of the lung to actually collapse; if it is severe, the entire lung will collapse.

Under normal circumstances, the pressure that is in your cats lungs is greater than the pressure in the pleural space.

This is the area that surrounds the lungs.

However, if air enters into this surrounding space, it puts so much pressure on your cat’s lungs that they collapse.

They will collapse either partially or entirely and can be the result of an external leak caused by an injury.

It may also be the result of an internal leak that is caused by a leak in the lung tissues or airways.

THE SYMPTOMS ARE QUITE DISTINCTIVE 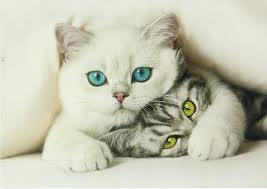 If not caught early Pneumothorax in cats can be life threatening

There are distinct symptoms of Pneumothorax in cats that will show you very quickly that something has happened and it will be very easy to tell that something is wrong with their breathing.

The first symptom will be a very rapid increase in their respiratory rate, generally higher than forty five breaths per second.

The normal rate is between twenty and thirty breaths per second, and this increased rate is very easy to spot.

In addition to the rapid breathing, you will also notice a very troubled and labored breathing, simply because your cat can not catch their breath or inhale because of what is affecting them.

It will not be long until you will notice, if you are watching, a blue tint start to develop in the lips.

If this happens, quickly open their mouth and look at their gums and tongue. If they are also turning blue, it is now an emergency situation.

Pneumothorax in cats has several potential causes and categories. The categories are open, closed, tension, spontaneous, and traumatic.

If you do not know what the actual cause was, it is helpful to understand which category it falls in and then try to relate it back to anything that may have been developing or has just occurred.

This will help your veterinarian in the treatment process.

The open form of Pneumothorax in cats occurs when there has been some type of a penetration to your pet’s chest.

This is suddenly allowing outside air to enter into the areas around the lungs.

The closed form of Pneumothorax is the result of this space closing and allows no more air to enter, and the spontaneous form is where it closes very suddenly, without any apparent reason.

The tension form results when air fills the chest cavity in your cat with each breath, but it is not allowed to exit, and the traumatic form is obvious, it is the result some type of a small or massive injury.

The most logical cause, which is an injury, can result from a bite wound from another cat or a dog.

It could also be some other type of an accident that is severe enough to cause a wound that is allowing this air to enter.

However, there are several other potential causes, especially in older cats, and are almost exclusively the result of some type of a rupture that has occurred.

The first potential rupture is spontaneous, especially in middle aged or older cats.

There are two types of lung cysts that can suddenly rupture and allow air to enter.

One is a tiny blister or pustule like cyst, called a bleb that are on the outer surface of your cats lungs.

The other is the bullae, also very small pustule like cysts, but within the lungs that rupture, also allowing air to enter.

Ruptures can also occur in the esophagus or the tissue of the lung itself.

YOUR CAT IS GOING TO BE HOSPITALIZED

There are several forms of treatments for Pneumothorax in cats, but there is one thing for certain.

Your cat is going to be hospitalized for several days as this is a very serious condition, and in most cases, it will be a lengthy recovery.

If it is an emergency situation, your cat may first need oxygen just to survive and breath.

In most cases, surgery will be required to remove the air from the chest cavity and repair the air leaks and damage.

A chest tube may also be placed in your cat’s lungs to allow for the continued release of air until the wounds heal completely.

Although chest tubes sound very frightening, they are usually only temporarily.

These tubes allow for large volumes of air to be moved out much quicker, and then allow continuity of removal.

They are usually removed after one or two days as the air flow stabilizes.

Pneumothorax in cats is a very frightening experience for any owner, and extremely stressful for your cat.

However, the symptoms are very distinct and clear, and if you react as soon as they occur, your cat should return to normal in a reasonable period of time.

Pet Medications for Pneumothorax in Cats